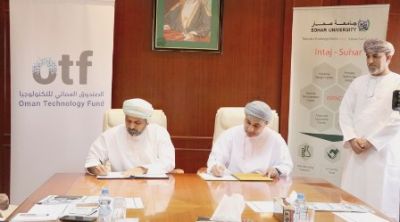 SUHAR: As part of the research activities and the ongoing cooperation between Sohar University and other institutions, the university and the Oman Education and Training Investments Company have signed two agreements with Oman Technology Fund (OTF) at the University campus in Suhar.

The first agreement was signed by Shaikh Anees bin Muhammed al Maamari, CEO of Oman Education and Training Investment Company, providing for the establishment of an incubator for industrial innovation at Sohar University, the first of its kind in the Sultanate. The second agreement was signed by Dr Hamdan Sulaiman al Fazari, Deputy Vice Chancellor of Sohar University for Resources, providing for funding a national competition organised by the university for 3-D Designs used in construction.

The two agreements were signed by Dr Yousuf al Harthy, CEO of Oman Technology Fund (OTF). Signing the agreements was attended by a number of officials from the Fund and the University, as well as the Oman Education and Training Investment Company. On the sidelines, there were some discussions on a number of topics and methods related to the development of the relationship between the two parties.

Dr Yousuf al Harthy said: “Innovation development is one of the priorities of this stage and cooperation with institutions of higher education is an essential aspect in the development of innovation. Our cooperation today with Sohar University comes within this framework and the general framework of the government of His Majesty Sultan Qaboos, of transforming the Omani economy into a knowledge-based economy. As the universities are the source of knowledge, the Oman Technology Fund seeks to integrate and cooperate with them as a basic source of innovation, cadres and human resources that are the basis of innovation and knowledge-based economy.

The most important return is upgrading the system of innovation and inventions, which is an integrative aspect based on the transformation of intellectual, creative and research products in universities into projects that can support the national economy and increase the competitiveness of the Omani economy.

On the agreement concerning the establishment of an industrial innovation incubator, Shaikh Anees al Maamari said: “The project is an incubator, and we, as a company, are trying to provide the right environment for business promotion.

The incubator will be the first industrial incubator in Oman, as well as the first incubator associated with a distinguished university providing academic support in addition to being specialized in the field of IT related industry. This agreement with the OTF aims at funding the project, and thus the elements for signing the agreement are complete. We hope that the project will be a supporter of the economy of Oman and the city of Sohar.

Professor Ghassan al Kindi, Pro Vice Chancellor of Sohar University for Research and Innovation, stressed the importance of the university’s role in localizing industries and empowering Omani youth in terms of technology. He talked about the agreement between the University and the Fund to finance a national competition, organised by the University, on innovation and the development of the apparatus of 3-D printing.