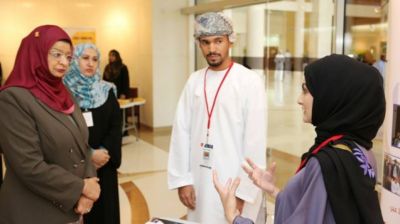 MUSCAT: Dr Rawya bint Saud al Busaidiyah, Minister of Higher Education, on Wednesday opened a joint exhibition and introductory orientation week for the students. A number of institutions and initiatives such as The National Center for Information Safety, the Royal Oman Police and the Salcon Foundation are taking part. The exhibition provided the students with scholarships and also the most important information of interest to them before and after travelling to countries of scholarship in different countries. During her tour around the exhibition, the minister listened to the roles of the institutions participating in the exhibition.

The exhibition educates the students and their parents and provides them with important information and guidance to follow before and after travel. Representatives of the General-Directorate for the Control of Narcotic Drugs and Psychotropic Substances spoke about the most important alerts to be followed and the norms to be followed at their country’s airports or countries of scholarship. Instructions like not to carry or transfer baggage that does not belong to them before knowing the contents, as well to identify with the most important materials and tools that are not allowed to be carried in their personal belongings.

Prohibited weapons or materials and forms of narcotic substances and the legal dimensions of their agents or promoters were also briefed. The minister also listened to the activities and work of many student associations like UK, the Netherlands, Australia, US, Ireland and other countries. The minister praised the efforts of the organisers and participants in the exhibition and praised the students with foreign missions and invited them to take advantage of the opportunity. — ONA