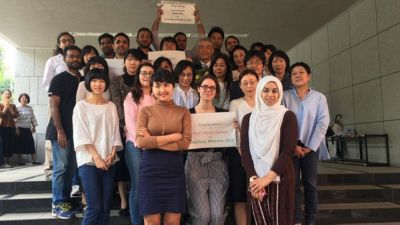 Muna, who is currently in Japan, spoke to the Times of Oman about her research, working with Dr Honjo and what she loves most about Japan.

“It was a normal day at the lab,” Muna said, talking about how it was when they received the news about their win. “Half an hour before [the results were announced online ]we found out about that we had won, Dr Honjo came in and asked us to delay a biweekly report because we’d just won the Nobel Prize in medicine. As soon as we started celebrating, we got a second call, and that’s when we took the photo that was posted by Nobel Prize on Twitter,” an elated Muna added.

Muna who was part of Dr Honjo’s research team explained their work, “The research is revolutionary, as it deals with the possibility of the patient’s own body attempting to fight against cancer cells without harming itself in the process. I am grateful to God for this. We go into science to make the world a better place for at least one person. The idea of reducing people’s suffering is what pushes me forward.

“This current stage of research deals with improving suggested therapies and also with the issue that some patients are unresponsive to the treatment, particularly older patients,” she added.

The Omani researcher has been in Japan for three years now and she says that she has been mesmerized with the country since she was in school. “Japan has been a dream right from the time I was in school and watched the Japanese cartoon Maruko. The coutnry has a certain attraction, particularly for scientists,” she said.

While Muna was always interested in working with Honjo, she didn’t apply to him directly. “My CV went to the Japanese embassy and that’s where he contacted me from,” she explained.

While this win is certainly a great step forward, this win has only pushed her to work more. Talking about her future plans she says, “If there’s one thing I learned, it’s that you can’t be limited by current science. Always leave your horizons open to possibilities. When I come back to Oman, I want to contribute to science in the Sultanate.”

In a statement online on October 1, the Nobel Assembly had said, "The Nobel Assembly at Karolinska Institute has decided to award the 2018 Nobel Prize in Physiology or Medicine jointly to James P. Allison and Tasuku Honjo for their discovery of cancer therapy by inhibition of negative immune regulation."