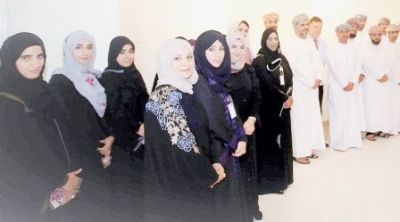 SALALAH, Adding yet another feather to its cap, the Ministry of Higher Education (MoHE) has received the prestigious ‘Committed to Excellence’ recognition for the second consecutive year from the European Foundation for Quality Management (EFQM). With this, the MoHE has become the pioneer of excellence in the government sector as it has emerged as the first organisation in Oman to receive this international recognition.

In her message, Dr Rawya bint Saud al Busaidiyah, Minister of Higher Education, expressed happiness over the achievement. “I am again proud of all the people who started our ‘Journey to Excellence’ (J2E) and who have contributed to this great success. I thank the excellence team in the Directorate General of Planning and Development (DGPD) for their efforts. I also thank all the people who conducted the very successful excellence projects, which led not only to many substantial benefits for the ministry, but also to this second international EFQM recognition. I see it as a responsibility to continue our J2E and become a role model for excellence in Oman.”

According to MoHE sources, EFQM, a non-profit foundation, has developed the EFQM Framework for Excellence. This framework is the most-used organisational framework in Europe. It is also widely used in many countries around the world and some GCC countries.

“Over 50,000 organisations use the EFQM excellence model. Many organisations, which have had a Quality Assurance Management System in place, have recognised that in order to reach excellence it is not enough to assure quality, they also have to apply higher standards. Therefore, they are using this model,” said the source.

The model is also used for assessing applications for the EFQM Excellence Award (European quality award). The EFQM’s ‘Committed to Excellence’ is an assessment and recognition scheme that helps organisations introduce an excellence initiative and deliver improved results.

“The J2E started in three pilot areas — Directorate General for Planning and Development, Directorate for Private Universities and Colleges, and Directorate General Higher Education Admission Centre. After the self-assessments, selected people from the three directorates were trained to become EFQM Leaders for Excellence. This training was followed by Lean Project Management trainings for the team members of six excellence projects. The excellence projects then were conducted and deployed within only 90 days,” said a senior MoHE official. After the successful pilot phase, the MoHE expanded its J2E in all the other directorates, ministry and under-secretary offices. The project results were substantial among employee and customer satisfaction, lean processes, and larger amounts of annual cost reductions.

Dr Abdullah al Sarmi, Under-Secretary, is also glad with the achievement: “We are delighted about the benefits we received from starting the J2E and, in addition, for having received the EFQM recognitions as the very first organisation in Oman. This recognition will give us high motivation to expand the excellence activities in our ministry. We will continue to build on this success,” he said. He appreciated the Planning and Development Directorate’s leadership and support for the excellence activities and all the efforts of employees to achieve a successful start of the J2E.

Dr Zaid Zabanoot, Director General for Planning and Development and J2E project leader, said: “We have invested in training for our employees by providing them with very good and relevant know-how, skills and coaching and we will continue doing that. We further invest in our employees, because our employees are the most important assets in the ministry. The trainings we have provided have been a very good investment; it paid off very well and very fast. All the people who have been involved in our excellence activities during the last two years are highly motivated to be part of this J2E.”

Some of the MoHE employees, who were part of the J2E, expressed happiness over the ministry’s international recognition in the field of excellence.

Alia al Busaidi, head of the Minister’s Office, called it an important journey “in which we learnt that excellence is not just an operational activity, it can be achieved only through clear directions. Under the guidance of DGPD we learnt how to improve our organisational performance. The projects led us to higher productivity, easy tracking of documents, speeding-up of work and it increased customer and employee satisfaction.”

Dr Abdullah al Shibli, DG of Colleges of Applied Sciences, called it a learning process to do things differently and in a better way. “We as leaders have to be prepared to learn about new leadership methods and skills, and to work stronger on strategic issues. For this, we have to empower our people.”

Lara Obiedat, DG of Scholarships, said: “I believe the J2E marks an important new phase of greater efficiency for our Directorate and the MoHE”.

Saif al Shmeli, Project Leader, said: “Besides adding value to the work at the ministry and increasing the satisfaction of employees and customers, I learned many different techniques about how to lay out solutions to the most difficult hurdles at work.”

Shaikha al Yaqoubi is a manager, who handled one of the excellence projects. “It is an achievement. In our surveys, customers are now confirming that they are satisfied with our new e-Services. We are motivated, because within a very short time we could initiate and see big changes for the better.”

Shaikha al Saadi, Assistant Director in scholarship directory, says she is proud that she could be part of the excellence team. “After having attended the ‘Excellence and Lean Project Management Training’ I am ready to work in other projects… It makes you proud to be part of J2E.”

Dr Karl J Koller, Excellence Expert from ITQM Switzerland, congratulated the J2E team. “Striving for excellence will reward the ministry with substantial cost savings, increased customer and employee satisfaction, and increased efficiency and effectiveness. The MoHE could become a role model for excellence in the Sultanate,” he said.