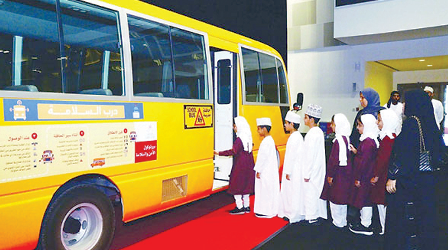 Muscat: Children cannot last for five minutes if they are accidentally locked inside of a school bus, the Royal Oman Police (ROP) said on Wednesday.

These safety warnings come at the time of the official start of the academic year for public schools in Oman and with just a few days until children all over the Sultanate begin attending classes again.

A statement from the ROP read: "Bus drivers should check that buses are empty when they deliver children to school and back home. This is to avoid innocent children becoming the victims of suffocating accidents.

"Just five minutes can lead to a child suffocating if he is left alone in a locked bus or car when temperatures increase."

"The buses must also be routinely maintained because vehicles with mechanical malfunctions can cause a fire," the statement added.

Ahmed Al Salti, an Arabic Language teacher at Al Nahdha primary school in Al Amerat, said: "I think that children suffocating inside vehicles is due to bus drivers of parents forgetting the danger of leaving children alone in the vehicles,which has led to these accidents occurring more than once."

"The lack of awareness from bus drivers and too few awareness bulletins working to raise awareness from families about this issue also has a role to play," Al Salti added.

The ROP has also said that it will increase the presence of police officers during this period and send patrols near schools and the roads leading to them to ensure that people obey traffic laws.