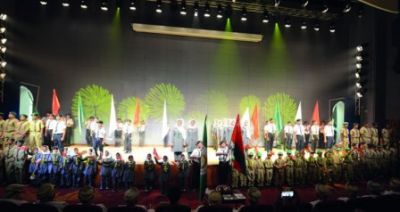 MUSCAT: The Ministry of Education, represented by the Directorate-General of Scouts and Guides (DGSG) on Wednesday marked the 36th anniversary of the inauguration of His Majesty Sultan Qaboos as the Greatest Scout of the Sultanate, coinciding with the Sultanate’s celebrations of the 49th National Day.

The celebration was held at the DGSG musical band auditorium at the Airport Heights under the auspices of Mohammed bin Salim al Toobi, Minister of Environment and Climate Affairs.

The ceremony included musical performances by the DGSG musical band as well as the “The Greatest Scout” operetta which included four artistic plateaus staged by scouts, guides, beavers and cubs during which they renewed their pledge of allegiance and loyalty to His Majesty Sultan Qaboos, the builder of Oman’s modern Renaissance. — ONA