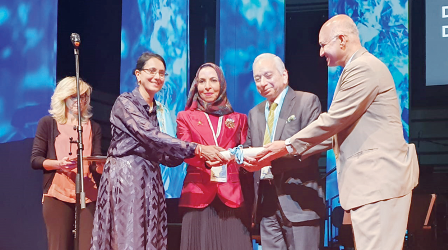 Budapest: The 2019 Unesco-Sultan Qaboos Prize for the Conservation of the Environment was presented India’s Ashoka Trust for Research in Ecology and the Environment (ATREE) in Budapest on Wednesday. Assigned by His Majesty Sultan Qaboos, Dr Madeeha bint Ahmed al Shaibaniyah, Minister of Education, Chairperson of the Oman National Commission for Education, Culture and Science, presented the prize to the representative of ATREE.

Ranked among the top 20 environmental think-tanks globally, ATREE is dedicated to the generation of interdisciplinary knowledge, education, and policy for the environment and for socially just development. ATREE also contributes to the conservation of diverse environments throughout India, including the Eastern Himalayas, the Unesco Nilgiri Biosphere Reserve and the Western Ghats World Heritage Site, Vembanad lake, Kaziranga and Manas National Parks, the grasslands of Kutch, the wetlands of Tamil Nadu and Kerala, and urban landscapes of Karnataka.

Presented once in two years, the Unesco Sultan Qaboos Prize for Environmental Conservation was established in 1989 through a generous donation by His Majesty Sultan Qaboos. Laureates are awarded $100,000, a diploma and a medal during an award ceremony.

The prize presentation ceremony took place at the World Science Forum organised by the Hungarian Academy of Sciences in cooperation with the Unesco, in the presence of Dr Janos Ader, President of Hungary, Shamila Nair-Bedouelle, Assistant Director-General of Unesco, and ministers as well as representatives of many countries. At the ceremony, Dr Shaibaniyah, Minister of Education, said: “Today we are honoured to celebrate the granting of the 2019 Unesco-Sultan Qaboos Prize for the Conservation of the Environment, an award launched by His Majesty Sultan Qaboos in 1989 to honour outstanding contributions of individuals, groups, institutes or organisations in the fields of environmental and natural resources research.”